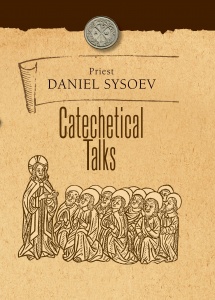 Description
PURCHASE HARD COPY OF THIS BOOK >>
This book is compiled from catechetical talks given by the missionary priest Daniel Sysoyev in Moscow. The printed texts of the talks preserve the spoken conversational style, drawing the reader in with numerous straightforward examples and clear answers to the catechumens’ “tricky” questions. The majority of those who attended Father Daniel’s talks became regular parishioners at Orthodox churches following their baptism. This book will benefi t catechizers, clergy, theological students, and all who wish to be always ready to give an answer to every man that asketh a reason of the hope that is in you with meekness and fear regarding the principles of the faith. Being actual dialogs on questions of faith and the Church, these talks will likewise be of interest to the catechumens themselves.

Admittedly, it was with great expectation that I first opened the English-language translation of Fr Daniel Sysoev’s book, Catechetical Talks. Around the time of his martyrdom in 2009, I began hearing reports from colleagues concerning Fr Daniel’s missionary work in Russia, praising it not only for its incredible results, but also for the fact that its achievements were born of a strict adherence to the Orthodox tradition. Shortly thereafter, brief excerpts of his writings began to circulate on the internet; then a podcast on his catechetical method; then a short book in Greek. All of these served to confirm the truth of reports which had been circulating concerning Fr Daniel’s work, and further stoked my desire to read his more extended works for myself. Having now received a copy of his Catechetical Talks and having read it cover to cover, I am left to observe that the book has not only met, but greatly exceeded my every expectation. Before us stands no generic, academic, ‘Introduction to Orthodoxy’, but rather an authentic work of Patristic theology, flowing with words of eternal life.

Fr Daniel’s book is composed of a series of transcribed catechetical talks designed to set forth the most essential elements of the Orthodox Christian faith, aimed specifically at catechumens being prepared for Holy Baptism. He begins his series speaking about the divine attributes, exploring, for example, what we mean when we call God ‘good’ or ‘just’ in accordance with his revelation, as well as how these appellations are reconciled with the seeming evils which permeate the world around us, and with the belief that there will be a final judgement over which the just and good God will preside. Fittingly, he crowns this discussion with the apex of the Church’s dogmas concerning God: an exposition of the dogma of the Trinity.

Fr Daniel dedicates his second talk to the Christian doctrine of Creation, particularly emphasizing the creation of the angels, the subsequent fall of Lucifer, and, of course, the creation of man and his fall. Naturally, this sets the table for the third talk to discuss the Incarnation of the Word of God, the key moments in Christ’s earthly ministry, the significance of his death on the Cross and subsequent resurrection, and his ascension into the heavens to be seated at the right hand of the Father. The fourth talk is dedicated to a discussion of the birth of the Church at Pentecost and its mission in the world, that is, to unite men to Christ, specifically emphasizing the role of each of the sacraments in the fulfillment of this mission. The fifth and final talk offers a detailed discussion of the commandments of God which situates Christian morality with the broader context of morality in general, demonstrating that Christian morals differ from the ‘morals’ of the world both with regard to their foundation and their end.

Appended to these five talks are three helpful essays. The first two explore both the historical and canonical practices surrounding Holy Baptism (a topic surrounding which there is much confusion in our times on account of our ignorance of Orthodox tradition). Here, for example, we find discussions concerning the selection of Godparents, whether children of the non-Orthodox may be baptized and under what circumstances this is permissible, as well as the absolute necessity that Holy Baptism be preceded by Catechism. Particularly noteworthy is his lengthy examination and critique of contemporary Baptismal practice, which concludes in his affirming the absolute obligation of priests to immerse, and not sprinkle or effuse, those being baptized except under the most dire of circumstances. The final essay is a brief but useful summary of how Fr Daniel himself approached preparing candidate for the sacrament of Holy Baptism.

There is a temptation to think that because Fr. Daniel is addressing himself to catechumens, his book will only be useful for those who are new to the Orthodox faith. Any such temptation ought to be immediately alleviated by a moment of honest self-reflection. Let us ask ourselves: who among us is capable of giving even the most basic account of our faith if asked? As Saint Nikodemos of the Holy Mountain writes in his work Christian Morality, “Many Christians if asked about Greek, Jewish, or Pagan myths, are ready to respond openly. But if one asks them to give an account of what they believe, how many articles of faith there are, how many are the Mysteries of the Church, how many commandments there are… if, I repeat, one asks them these and similar questions, which every Christian who desires to be saved ought to know how to answer, then they are silent, dumbstruck, and totally incapable of giving any reply” (p. 188). There is not one of us in the modern era that could not use a refresher course in the fundamentals of our Holy Orthodox Faith – a sort of spiritual return to the catechumenate.

In terms of the book’s ethos, it becomes immediately clear that Fr Daniel has avoided producing yet another dry, textbook-style introduction to Orthodoxy. He avoids this, first, by frequently indulging a clear desire to be contextual – not contextual in the sense of renovating the theology of the God-inspired tradition in order to make it conform to, and justify the passions, but rather contextual in the true sense, in the Patristic sense, whereby he directly engages modern culture, answering its questions and challenges on the basis of the Church’s tradition.

We see examples of this in his treatment of the questions surrounding the theory evolution and practice of abortion, but also in his treatment of Islam, where he pays special attention to situate its claims with the context of the Patristic tradition. Second, Fr Daniel carefully interweaves the dogmatic and moral throughout the whole of his text: nothing is treated purely abstractly. Last, because the book is a series of transcribes talks as mentioned above, the work is very conversational in tone. Fr Daniel asks many rhetorical questions, takes comments and questions from his audience, and recounts personal stories, all of which give the reader the sense of being present in a parish hall, hearing Fr Daniel himself speak.

The translation of the book is near-flawless: it reads like a work originally written in English. I noted only two or three typographical in the course of my initial reading. In addition it is solidly-bound and typeset in such a way that it reads very comfortably.

Beyond all that has been said above, what is most encouraging about the Catechetical Talks is how uncompromisingly Orthodox it is. In Fr Daniel, we find one who is at once sensitive, yet firm in his presentation of the Orthodox Faith. A prime example of this is his completely unadulterated, unqualified presentation of the Orthodox Church’s claim to be the, “One, Holy, Catholic, Apostolic Church,” through which saving grace flows, and outside of which those in heresy are found. He also unapologetically presents the extensions of this belief: that non-Orthodox cannot be commemorated in the Church’s liturgical prayers, that they must depart at the exclamation, “As many as are catechumens, depart” during the Divine Liturgy, and that they cannot be given antidoron, truths which are shocking to many because they have never been taught authentic ecclesiology.

The book’s final chapter tells us that Fr Daniel ultimately baptized only about 60-70% of those who attended his catechetical school: “There have been cases,” he writes, “when people consciously refused to receive baptism, once they learned the faith of the Church because Christianity goes against their convictions. I think their separation only benefited the Church, and even those who refused to be baptized realized that their views contradict the Word of God. When they come to their senses they will be able to consciously accept the faith.” (p.341) Spiritually speaking, this is the safest method for all involved. What is deeply impressive, and what should give us courage, is that despite his strict adherence to tradition, he yet baptized over 100 individuals per year during the course of his priestly service, a service which was ultimately crowed with martyrdom.

Contrary to Fr Daniel, we are taking an almost Jesuitical approach to presenting the Orthodox Faith to enquirers. Rather than tempering our honesty with an appropriate sensitivity to inquirers’ backgrounds and experiences, we instead lightly skim over, or even hide difficult truths from them, hoping to simply ‘get them in the door’. This approach bears bad fruit. Individuals who are catechized in this way not only unintentionally harm other faithful, spreading their uncorrected, unorthodox beliefs to those around them causing scandal and confusion, but they often become scandalized themselves when they encounter authentic Orthodox teaching at a later stage in their spiritual journey. In some cases such individuals even wind up leaving the Orthodox Church altogether.

At a time when increasingly silly things about our holy Orthodox faith are gaining wide circulation (see, for example, George Demacopoulos’ recent piece entitled, ‘Orthodox Fundamentalism’), it is greatly refreshing to find a book which is entirely free of this spirit, and which from cover-to-cover deserves commendation. Fr Daniel has left us a great inheritance. I can only hope that more of his work will be shared with us in the future. May we have his blessing!